1. Drug Discovery
Discovery of a new drug involves an elaborate process. It starts with synthesis of a large number of chemical compounds. Historically, drugs were discovered through identifying the active ingredient from traditional remedy or by chance discovery. Later, chemical libraries of synthetic small molecules, natural products or extracts were screened in intact cells or whole organisms to identify substances which have desirable therapeutic effect in the process of classical pharmacology. After sequencing of human genome which allow rapid cloning and synthesis of large quantities of synthetic proteins, high throughput screening of large compounds libraries against isolated biological targets has become another effort for new drug discovery.

Modern drug discovery involves identification of screening hits, medicinal chemistry and optimisation of those hits to increase the affinity, selectivity, efficacy of the potency, metabolic stability and oral bioavailability (Fig. 2.10). Once a compound which fulfils all these requirements has been identified, the process of drug development begins with clinical trials. Before starting a clinical trial safety of the drug is evaluated in experimental animals. This process is called as pre-clinical evaluation. 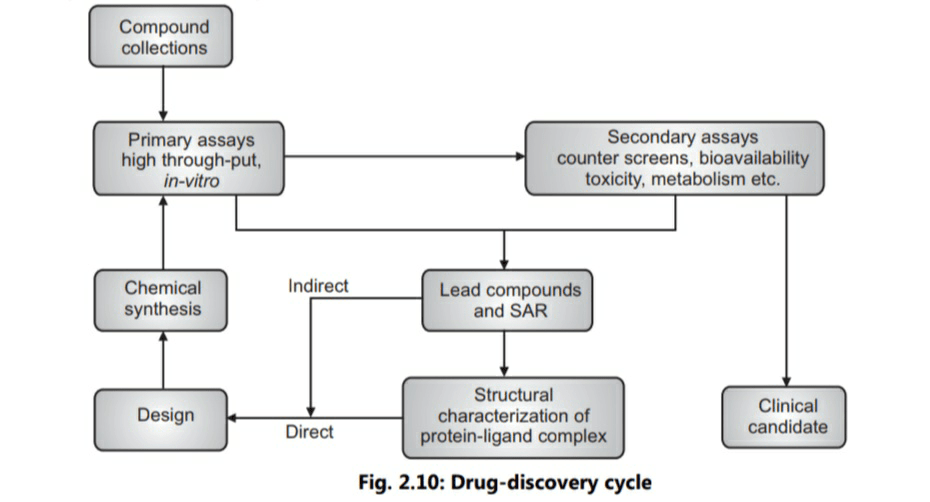 2. Pre-clinical Evaluation
The main goals of pre-clinical studies are to determine the safe dose for first-in-man study and assess a product’s safety profile. On an average, only one in 5,000 compounds which enter drug discovery to the stage of clinical development becomes an approved drug.
Each class of product may undergo different types of pre-clinical research. Drugs may undergo pharmacodynamic (PD), pharmacokinetic (PK) and toxicological testing. This data allows researchers to estimate a safe starting dose of the drug for clinical trials in humans. While performing pre-clinical studies, Good Laboratory Practices (GLPs) are followed. Typically, both in-vitro and in-vivo tests are performed. Studies of a drug’s toxicities include which organs are targeted by the drug. Three special types of toxicities are performed: they are carcinogenicity (tests for evaluating potential to cause cancer), mutagenecity (tests for evaluating mutagenic potential) and tetatogenecity (tests for evaluating potential damage to fetus during pregnancy of mother).
Animal Testing
Information collected from pre-clinical studies is vital for safe human testing. Typically, animal testing involves at least two species. The choice of species is based on animals which will give best correlation to human trials. Usually murine animals like mice/rats and canine animals like dogs are used for testing. In addition, primates like monkeys or porcine animals like pigs may be used for pre-clinical testing. Differences in the gut, enzyme activity, circulatory system, or other considerations based on dosage form, site of activity or noxious metabolites help in selection of animal species. Canines like dog are good models for oral dosage form. Regulatory guidelines like those from USFDA, EMA, and other international and regional regulatory authorities require safety testing in at least two mammalian species like rabbit, including a non-rodent species, prior to human trials authorisation.

Animal testing also needs ethical considerations. Constitution of animal ethics committee and approval of test protocol by the animal ethics committee is necessary. In India, clearance from Committee for the Purpose of Control and Supervision on Experiments on Animals (CPCSEA) has provided elaborate guidelines on handling of animals, animal care, physical facilities in animal house, food, water for animals, sanitation and cleanliness and waste disposal. It is suggested that standard operating procedures (SOPs) for methods adopted to animal husbandry, maintenance, breeding, animal house microbial analysis and experimental records need to be maintained.

3. Phases of Clinical Trial
All new drugs are labelled as Investigational New Drugs (INDs) by UDFDA. All INDs undergo various stages of development. Clinical trials have been classically divided in to four phases as described below. In addition, phase 0 has been added in recent years.
3.1 Phase 0
Phase 0 has been added by USFDA from 2006 guidance on exploratory IND studies. Phase 0 trials are known as human micro-dosing studies and are designed to speed up the development of promising drugs or imaging agents by establishing very early on whether the drug behaves in human subjects as was expected from pre-clinical studies. Distinctive features of phase 0 trials include administration of sub-therapeutic doses to a small number of subjects (10-15) to gather preliminary data on pharmacokinetics of the drug.
Phase 0 study gives no data on safety or efficacy, being by definition a dose too low to cause any therapeutic effect. Based on information from phase 0 studies, a decision regarding progress of the drug in next phases is taken.
3.2 Phase I
Phase I trials were formerly called as first-in-humans studies. Normally, a small group of 2-100 healthy volunteers are recruited in phase I trial. These trials are conducted in a clinical trial clinic, where the subject can be observed by a full time staff. The subject who receives the drug is usually observed until several half-lives of the drug have passed. This phase is designed to assess the safety, tolerability, pharmacokinetics and pharmacodynamics of a drug. Normally, phase I trials include dose-ranging, also called as dose escalation studies, so that the best and safest dose can be identified. Normally, phase I trials include doseranging, also called as dose escalation studies, so that the best and safest dose can be identified. The tested range of doses is usually a fraction of a dose which causes harm in animal testing. Although phase I trials are conducted on healthy volunteers, there are some circumstances when clinical patients are used for phase I. In such cases where treatment islikely to make healthy individuals ill, patients of terminal cancer or HIV are used for the trial. In addition to terminal patients, patients who have been already tried and failed to improve on existing standard therapies may also participate in phase I trials. Volunteers are paid a variable inconvenience fee for their participation in phase I trial. In addition, their health insurance premium is paid by the sponsor of the trial. Before beginning phase I trial, the sponsor must submit an IND application to FDA detailing the preliminary data on the drug gathered from cellular models and animal studies.
Three types of studies are included in phase I trials: single ascending dose, multiple ascending dose and the effect of food.

3.3 Phase II
Once a dose range of doses is determined, the next goal is to evaluate whether the drug has any biological activity or effect in human beings. Phase II trials are performed on a relatively larger group as compared to phase I trials. Normally, 100-300 patients are included in phase II studies. Genetic testing is common, especially when there is evidence of variation in metabolic rate of the drug. When the development process for an IND fails, it is usually during phase II trials. Conveniently, phase II trials can be divided in to two sub-categories: phase II A and phase II B. Phase II A studies are pilot studies designed to demonstrate clinical efficacy or biological activity. It can be termed as “proof of the concept” studies. Phase II B studies find the optimum dose at which the drug shows the biological activity with minimal side effects. They are also termed as “definite dose-finding” studies. Occasionally, phase I and phase II may be combined to test both efficacy and toxicity.
Phase II studies historically have recorded lowest success rate. In 2010, the percentage of phase II trials that have proceeded to phase III was 18 %. During 2006-2015, only 37% of developmental drugs advanced from phase II to phase III.
3.4 Phase III
This phase is designed to assess the effectiveness of the IND. Phase III studies are randomised controlled multicentre trials on a large patient groups ranging from 300-3000.
These studies are aimed at being the definitive assessment of effectiveness of the drug. Phase III trials are the most expensive, time-consuming and difficult trials to design and run, especially in chronic diseases. Phase III trials of chronic diseases often have a short follow-up period of evaluation, relative to the period of time during which intervention might be used in clinical practice. Phase III studies are also called as “pre-marketing phase”. During this stage, sub-groups of patients like those having hepatic, renal or cardiac failure may also be exposed with appropriate modification in dosages. If proof about adequate safety is available, then paediatric and geriatric patients may also be included. In case of paediatric patients, a separate clinical study is suggested by regulatory authority.
It is expected that at least two successful phase III trials, demonstrating a drug’s safety and efficacy are necessary in order to obtain approval from appropriate regulatory agencies like USFDA, EMA etc. Once a drug has proved satisfactory in phase III trials, the trial results are usually combined in to a large document containing a comprehensive description of the methods and results of human and animal studies, manufacturing procedures, formulation details and shelf life. This collection of information makes up the regulatory submission which is provided for review to appropriate regulatory authorities in different countries. The regulatory authorities review the submission, and if found appropriate, give approval for marketing the drug to the sponsor.
By 2010, about 50% of the INDs fail during phase III trials or are rejected by national regulatory agencies. An estimate of phase II/III trials depends on various factors, therapeutic area being studied and types of clinical procedures as key drivers. It is indicated that, phase II studies may cost about $ 20 million (` 130 crores), and phase III studies $ 53 million (` 345 crores ).
3.5 Phase IV
By the end of phase III studies, after review, regulatory authorities provide marketing permission to the sponsor. Thus, a phase IV trial is also known as post-marketing surveillance trial/confirmatory trial. Phase IV trials involve surveillance of safety and ongoing technical support of a drug. Phase IV studies may be required by regulatory authorities or may be undertaken by the supporting company for competitive or other reasons. The safety surveillance is designed to detect any rare or long-term adverse effects over a much larger patient population and longer time period than was possible during the phase I-III clinical trials. If an adverse drug effect is rare, then it may be detected only in phase IV studies. The minimum time period mandatory for phase IV clinical trial is of two years. During this period, if a serious adverse reaction is observed, then the use of drug may be appropriately restricted. If the adverse reaction is too serious, probably causing death, then the drug may be withdrawn from the market during phase IV studies.
The entire process of developing a new drug from pre-clinical research to marketing can take 12-18 years and may cost over $ 1 billion (` 6500 crores). The life of patent of a drug expires 20 years after its registration. The figures indicate big financial risks in developing a new drug.
A summary of different phases of trials is presented in table 2.5. 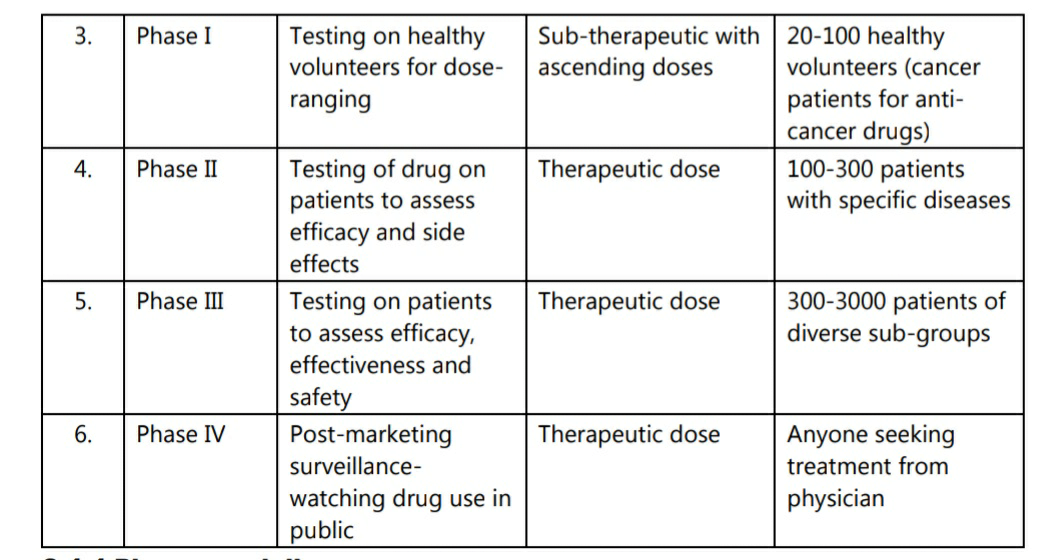