When more than one drug is administered to a patient, then there is a possibility of interaction between their effects. The cause may be pharmacodynamic or pharmacokinetic. Each one of them is discussed below.

1.1 Absorption Interactions
• Some drugs increase the speed with which a drug passes through the intestine. These drugs decrease gastric emptying time. Such drugs, e.g. domperidon are called as pro-kinetic drugs. Pro-kinetic drugs can reduce timing of a drug in GIT, resulting in lower concentration of co-administered drug. Some other drugs like atropine can reduce gastro-intestinal motility; such drugs may increase stay in GIT and therefore their absorption may increase.

• Solubility of a drug is an important factor. Absorption of some drugs can be drastically reduced if they are administered together with food of high fat content.

• Formation of non-absorbable complexes is yet another cause for reducing their absorption. Chelation with cations, binding with proteins and formation of large complexes are some of the mechanisms. The examples are as follows: tetracycline can chelate calcium ions; sucralfate binds with proteins; cholestyramine forms complexes with thyroxine/digoxin.

• Action of enterocytes on P-glycoprotein is one more mechanism. Consumption of grape fruit juice increases bioavailability of drugs like verapamil.

1.2 Transport and Distribution Interactions
• In this case, the main mechanism is competition for plasma protein transport. If two drugs compete for the same site on plasma albumin and if one drug has more affinity than the other drug, then one drug can replace the other leading to enhanced pharmacological effect of another drug. Phenylbutazone or sulphamethoxazole can displace warfarin leading to effects of warfarin.

1.3 Metabolism Interactions
• Many drug interactions are due to alterations in drug metabolism. Cytochrome P450 is the classical example.
Cytochrome P450 (CYP 450)
• CYP 450 is a very large family of haemoproteins, characterised by their enzymatic activity and their role in metabolism of various drugs. The most important enzymes are CYP1A2, CYP2C9, CYP2C19, CYP2D6, CYP2E1 and CYP3A4. Majority of these enzymes are involved in metabolism of steroids or drug hormones. As an illustration, drugs related to CYP1A2 are listed in table 2.2.

• Certain drugs may act as substrate for a type of CYP450 enzyme. Some other drug may inhibit enzymatic action of CYP450. Inhibition of CYP450 will lead to reduced metabolism of
the relevant drug. Some other drugs may induce the enzyme and increase its concentration. As a result of enzyme induction, metabolism of related drug will be enhanced. Both induction and/or inhibition of a type of CYP450 can lead to drug interaction.

Some food components also act as inducers or inhibitors of enzymatic activity. Some examples are shown in table 2.3. 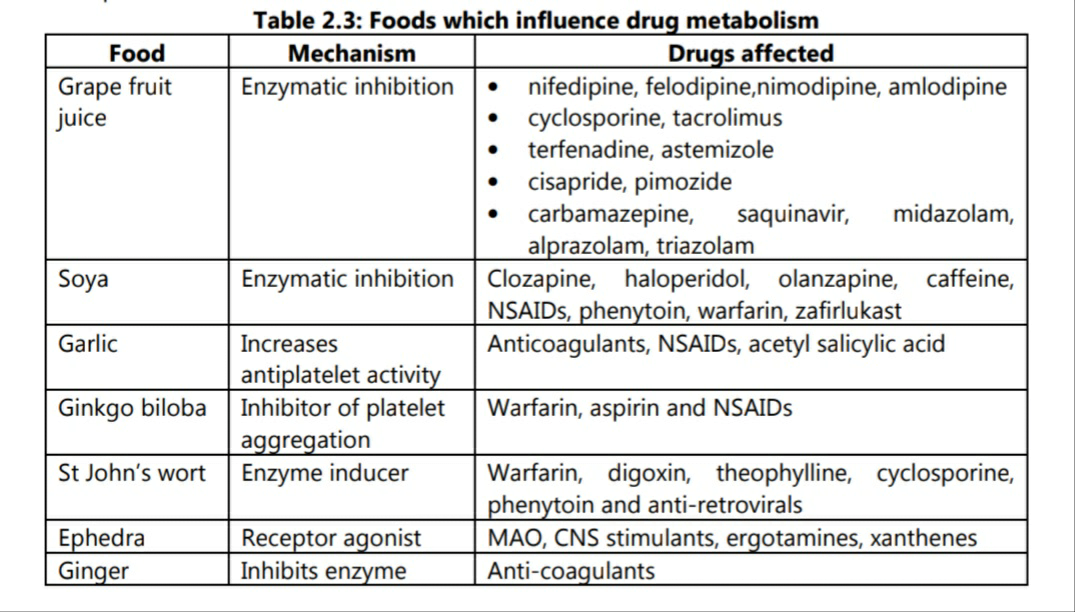 1.4 Excretion Interactions
These are divided in to two excretory mechanisms: renal excretion and bile excretion.
1. Renal excretion
Only the free fraction of the drug which is dissolved in blood plasma can be removed through kidney. Hence, drugs which are tightly bound to proteins are not available for renal excretion. Creatinine clearance is used as a indicator for kidney functioning but it is only useful in cases where the drug is excreted in an unaltered form in the urine. During formation of urine, drugs pass through nephrons by filtration. Filtration depends on a number of factors including pH of urine. It is shown that, drugs which act as weak bases are increasingly excreted as the pH of urine becomes more acidic. Conversely, weak acids are increasingly excreted as urine becomes more alkaline. Usually, pH of urine is acidic in nature; however for excretion of weak acids, alkalinisers like sodium citrate are given orally to promote their excretion. Table 2.4 lists some of the weak acids and weak bases which are used as drugs. 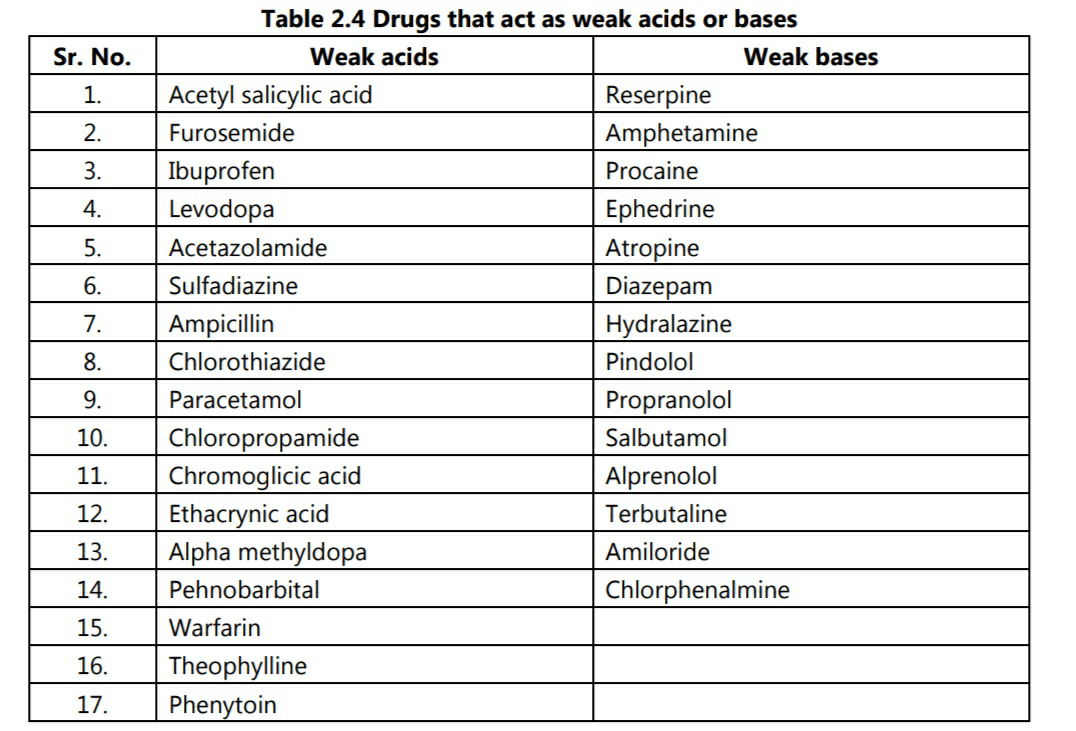 2. Bile excretion
Bile excretion involves use of metabolic energy in active transport across the epithelium of bile duct against concentration gradient. The transport system can be saturated if the plasma concentration of the drug is too high. Bile excretion of drugs occurs when their molecular weight is greater than 300 and they contain both polar and non-polar groups. The glucuronidation of the drug in the kidney facilitates bile excretion. Substances with similar physico-chemical properties can block the receptor. A drug excreted in the bile duct can occasionally follow entero-hepatic circulation and may be reabsorbed by the intestine. In such cases it can lead to interaction with other drugs.

2. Pharmacodynamic Drug Interactions
The change in an organism’s response on administration of a drug is an important factor in pharmacodynamic interactions. These changes are difficult to classify due to wide variety of modes of action and various underlying mechanisms. Whenever the interactions are based on biological response of a drug at the active site, it is considered in this category. Pharmacodynamic interactions can occur on:
• Pharmacological Receptors:
Whenever interactions between two or more drugs are directly related to the same receptor, they are considered in this category. Receptor interactions are further subclassified as homodynamic and heterodynamic.
1. Homodynamic
If two or more drugs act on the same receptor, they are considered under this category. They are further sub-classified as: pure agonists; partial agonists or antagonists. Antagonists can be either of competitive or uncompetitive type
2. Heterodynamic
If two or more drugs act on different receptors, they are considered under this category.
(i) Signal transduction mechanisms: These mechanisms are molecular processes which commence after interaction of the drug with receptor. cAMP is signal transducing substance in the action of insulin.
(ii) Antagonistic physiological systems: When two or more drugs alter a physiological process by different mechanisms or through different mechanisms, the interaction falls in this category. The action of digoxin on cardiac fibres can lower levels of potassium. Diuretic like furosemide also causes lower levels of potassium because of its action on kidney. Lower potassium levels are termed as hypokalemia. Thus, hypokalemia caused by diuretics increase toxicity of digoxin.