• Evaporation is the process of removal of solvent from the solution by boiling the liquid in a suitable vessel and withdrawing the vapour, leaving a concentrated
product.

1. Evaporation process is used in the manufacture of bulk drugs, particularly in pharmaceutical industries.

2. Evaporation is used in the manufacture of biological products. e.g. Insulin, enzymes and hormones.
3. In demineralization of water.

• Evaporating pan consists of a hemispherical pan made from copper or stainless steel and surrounded by steam jacket. 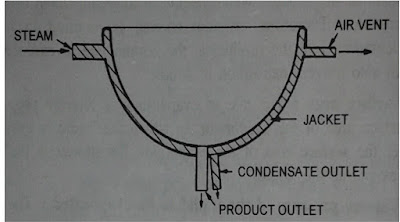 • The hemispherical shape provides a large surface area for evaporation.

• The evaporators are mounted in such a way that they can be tilted to remove the product.

• The evaporating pans are heated by steam which passes through a steam jacket.

• This type of evaporator is commonly known as a “Still” because the evaporating pan is covered and is connected to a condenser so that the vapours are condensed into the liquid. 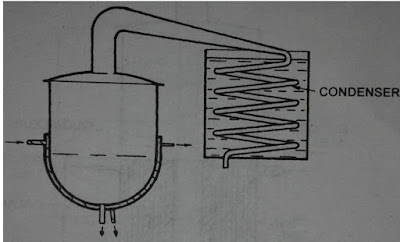 • There is a vessel similar to the evaporating pan with a cover that connects it to the condenser, so that the liquid is distilled off.

• In this type of evaporator, several parallel 8 feet long tubes are joined together in series.

• Each tube is enclosed in the opposite direction to the feed liquid in the inner tube. 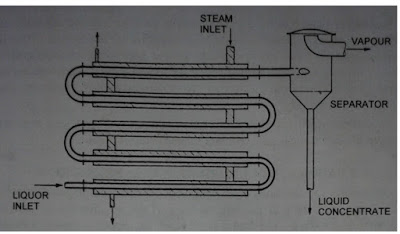 • The liquid passes through the tubes, gets evaporated as it moves along the tube and finally passes to a separator.

• The concentrated liquid is collected at the bottom while the vapour is led off to the atmosphere or used for some heating purpose.

• Short tube evaporator consists of a number of tubes which are from 1 to 2 meters in length and from 40- 80 mm in diameter. 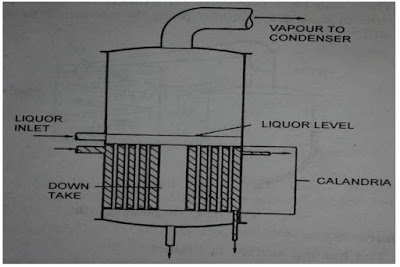 • The tubes are filled with liquid and surrounded by steam.

• The level of the liquid is maintained slightly above the top of the tubes so that the space which is left in the evaporator can be used for the purpose of separation of vapour from the boiling liquid.

• Long tube evaporators a large number of vertical tubes about 7 meters in length and 50 mm in diameter are enclosed in an outer jacket to which steam is supplied. 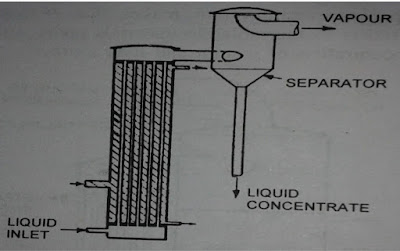 • The pre-heated feed liquid is admitted at the base.

• Here it boils and the vapours formed take the liquid up the tube at a velocity of about 6-7 meters/second.

• The liquid takes only a few seconds to travels the length of the tube, so the evaporator is very suitable for heat-sensitive substances.

• In this types of evaporators, some mechanical device is fitted to circulate the contents heating in it. e.g. an evaporating pan in which the material is agitated by a stirring rod or by mechanical propeller.

• The liquid is circulated by means of a pump and as it is under pressure in the tubes the boiling point is raised and no boiling takes places.

• As the liquid leaves the tubes and enters the body of the evaporator, there is a drop in pressure and vapour gets removed from the supper heated liquid.

• Two evaporators are connected together with a piping arrangement so that the vapour from the calandria of first effect (which is heated by steam) is used to heat the calandria of the second effect. 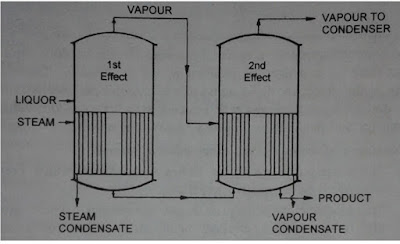 • This means that the calandria of the second effect is used as condenser for the first effect, so that latent heat of vaporisation is used to evaporate more quantity of the liquid instead of its going as waste.

• The vapour from the second effect then taken to a condenser and converted into liquid.

• The heating surface is limited and decreases
proportionally to increase in size of the pan.

• The evaporating pan cannot be used for the
evaporation of thermolabile pharmaceutical materials which are dissolved in an organic solvent, such as, ethyl alcohol, as there is no provision to recollect the costly organic solvent.