Drug-Receptor Interaction
The idea that drug molecules interact at specific sites in the body is a relatively old concept. However, proof of the receptor concept lag behind theory. In 1965, Propranolol was the first β-adrenergic antagonist which entered into clinical practice to completely convince the scientific community that receptors truly exist.
The basic concept of drug-receptor interactions can be described by the “lock and key” model in which a receptor structure (the lock) has a region with a particular shaped pocket at which an appropriately shaped molecule (the key) can interact. See Fig. 2.1. The drug which interacts at the receptor binding site is known as ligand. In other words every drug is a ligand. It is to be appreciated that, receptors have been evolved the ages to provideparticular functions within the body; it is coincidence that, the ligand/drug interacts with the receptor. The purpose of existence of receptors is to interact with some normal endogenous component or common environmental material. Thus, drug molecules which interact at receptors either mimic or inhibit normal body compounds. Receptors themselves are normally categorised as protein structures, either a single protein or a complex comprised of multiple protein sub units. The binding sites on the receptor complex where the drug interacts may only be a small portion of the molecule. The interaction of a drug molecule with its receptor can be represented in the manner as shown in Fig. 2.2, where D is the drug concentration, and R is the free receptor concentration, and DR is the concentration of receptor molecules occupied by drug molecules. The interaction of the drug at its binding site on the receptor complex is governed by two important concepts: affinity and intrinsic activity. 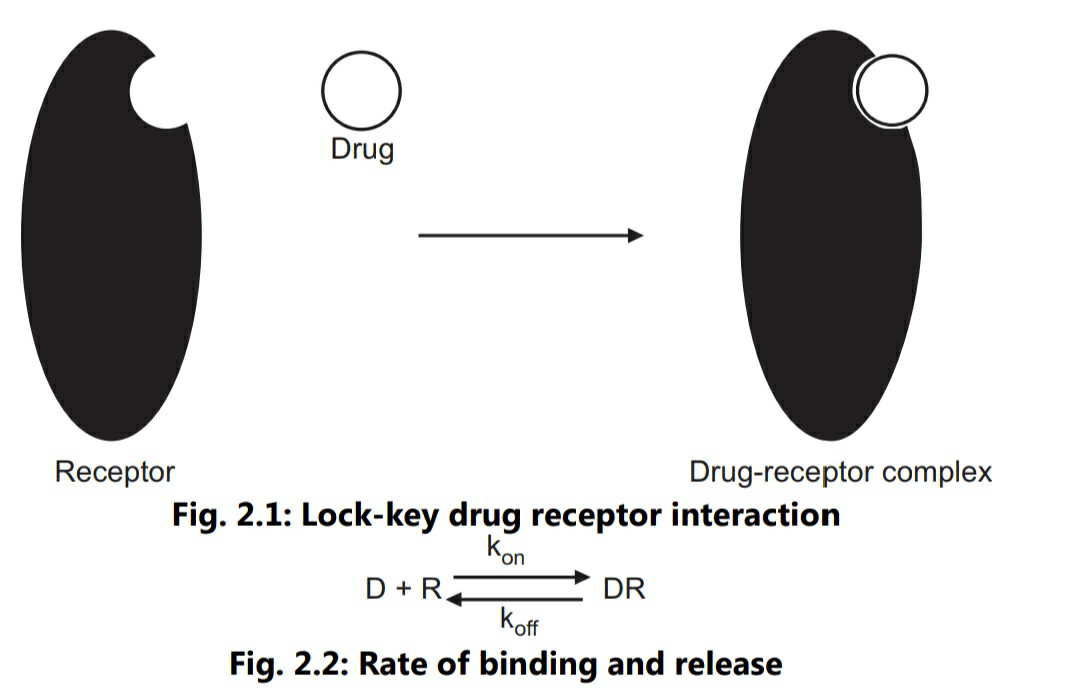 Affinity describes as how well a particular compound is drawn into and held at the binding site. Intrinsic activity is used to describe the effect which the drug has, when it interacts with the receptor site. A drug may have good affinity, but if it has no intrinsic activity, it will elicit no response even after binding to the receptor. On the other hand, a drug that has good intrinsic activity will elicit a strong response at the receptor zone if it has good affinity. Alternatively, if the affinity of a compound for the receptor site is low, even a high level of intrinsic activity will not elicit much of a response.
Let us have a look at equation mentioned in Fig. 2.2. At equilibrium, the dissociation constant (KD) of a drug-receptor complex is equal to koff/kon. The equilibrium affinity constant (KA) is the reciprocal of the equilibrium dissociation constant (1/KD). Therefore, the smaller the equilibrium dissociation constant is, the greater the affinity of the drug for the receptor. This is useful while examining how well different drugs bind to a specific receptor complex. To understand how individual molecules, such as drug molecules move around receptor zone it is important to remember that, drug molecules are mixed with naturally available molecules around the cell moving in a random manner driven by Brownian motion. The interaction of a molecule with its receptor is primarily a matter of chance. The possibility that a particular type of compound will interact with a given receptor is based on thenumber of molecules (concentration) located near the receptor site. The greater the concentration, the more likely is that, the random motion of a particular molecule will bring it close to a receptor site to interact. If a molecule is able to interact with the receptor site, it is said to have affinity for that site. The stronger it interacts, the greater is its affinity for that receptor site.

The concept of interaction at the receptor site is based mainly on drug’s shape and chemical makeup. The receptor site may have particular chemical functional groups which interact at specific places. Most drugs may bind very briefly with the receptor site and are knocked out of the site by collisions with other molecules which are moving around in the surrounding area. Therefore, a drug may interact with the receptor zone very briefly. However, if the concentration of the drug molecules in the surrounding area is high, the likelihood of continued receptor-drug interaction increases. This idea is critical in understanding drug action. The greater the drug concentration at receptor zone, the more likely it is that a drug molecule will be occupying the receptor site at any given time. As the drug concentration goes down, the fraction of time the receptor is occupied also decreases.
The response generated from a receptor interaction can be plotted against the dose of a drug to produce the classic dose-response curve (DRC) which is so commonly known in pharmacology. (Fig. 2.3). Details of DRC are discussed under sub-section 2.1.12.