Signal Transduction Mechanisms
Signal transduction is the process in which a chemical or physical signal is transmitted through a cell as a series of molecular events, most commonly protein phosphorylation catalysed by protein kinases, which ultimately results in a cellular response. Proteins responsible for detecting stimuli are called as receptors or sensors. The changes initiated by drug-binding/signal sensing in a receptor give rise to a signalling cascade, which is a chain of biochemical events along a signalling pathway. At molecular level responses include changes in transcription or translation in genes and post translational and conformational changes in proteins, as well as changes in their location. In multicellular organisms, signal transduction pathways have evolved to regulate cell communication in a wide variety of ways.
Each component of a signalling pathway is classified according to the role it plays with respect to initial stimulus. Ligands/drugs are called as first messengers, while receptors are signal transducers, which then activate primary effectors. Such effects are often linked to second messengers which can activate secondary effectors and so on. Depending on the efficiency of the nodes, a signal can be amplified, so that, one signalling molecule cangenerate a response involving hundreds to millions of molecules. The transduction of biological signals is characterised by delay, noise, signal feedback, freed forward and interference, which can range from negligible to pathological state. With the advent of computational biology, the analysis of signalling pathways and networks has become an essential tool to understand cellular functions and disease, including signalling rewiring mechanisms underlined responses to acquired drug resistance. (Fig. 2.4). 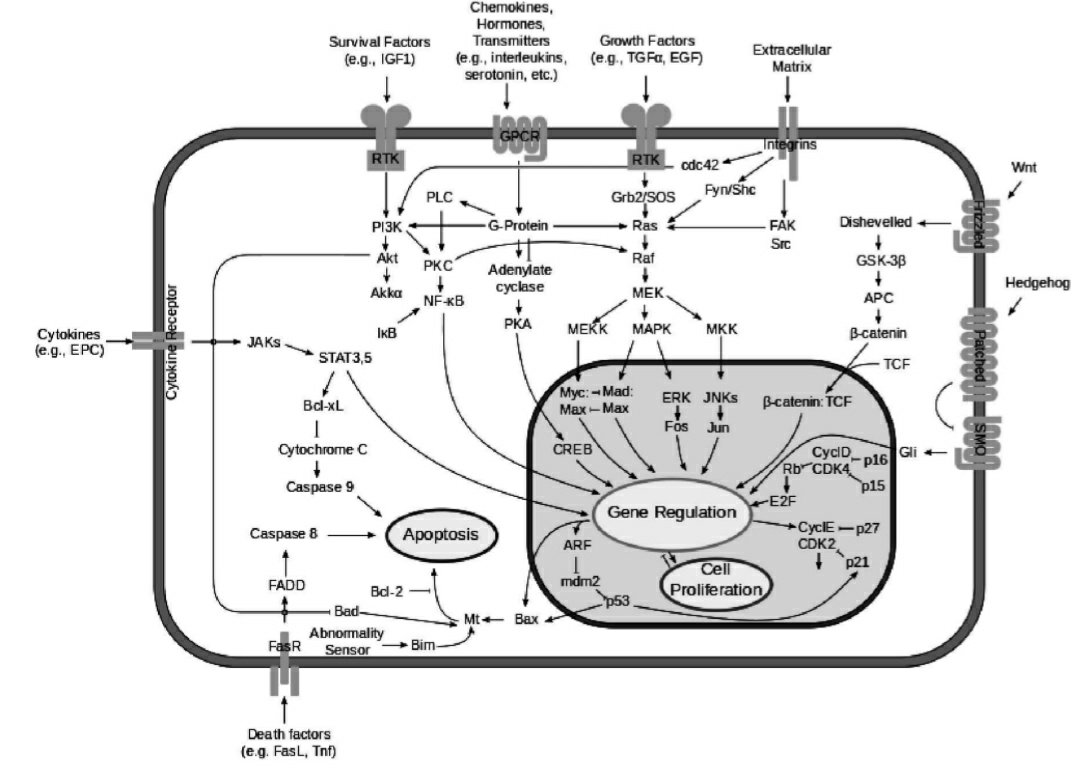 Intracellular receptors, such as nuclear receptors and cytoplasmic receptors are solubleproteins localised within their respective areas.
Secondary messengers include calcium, lipid messengers, nitric oxide and redox signalling.
Some of the receptors are discussed in detail in subsequent sections.