• Resins are hard transparent/translucent, bitter substance
• Resins are usually amorphous and rarely crystalline
• Resins are usually heavier than water except for some
• Specific gravity ranges from 0.9-1.25
• Resin melt upon heating
• Soluble in water
• Insoluble in alcohol
• Resin burn with smoke in the presence of air or oxygen, but in the absence of oxygen they decompose into various hydrocarbon upon heating
• They are bad conductor of heat and electricity

Resins contain carbon, oxygen and hydrogen but o nitrogen. Resins can be oxidized resulting in darkening of colour and decrease in solubility.
Resins are not a single pure entity but a mixture of different components including
• Resin acid
• Resin alcohol
• Glycoresins
• Resenes

Composition of Resins (Classification on the basis of functional group)

Resins are chemically mixtures of different constituents which can be classified as Resin acid
Resin acid also known as ricinoleic acid. Resin acid include carboxylic acids and phenols. These acids occur both in Free State and as their ester. Their metallic salts known as “resonates” are used in manufacture of varnishes and soap.
Example
Abietic acid
It is present in colophony. It is used in manufacture of varnishes lacquers, soap and plastic. 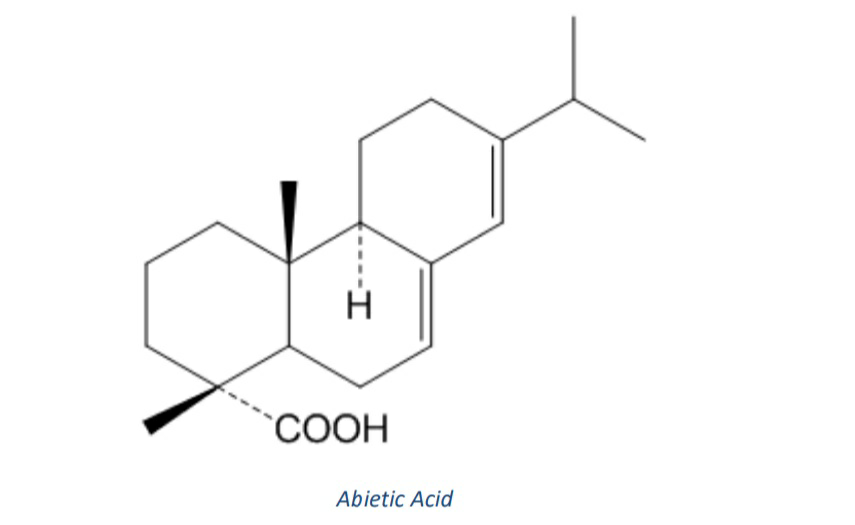 Guaiaconic acid
It is present in Guaiac
Resin alcohol
Resin alcohols are classified into
Resinol
Resinotannol
Resinols are simple resin alcohol which occur either in free state or as ester with simple aromatic acid like benzoic acid, cinnamic acid, and salicylic acid.
Resinols do not give positive ferric chloride test (because it has no tannins)
Example: Benzoresinol from benzoin
Resinotannol also known as resinophenols. Resinotannol are high molecular weight alcohol also known as phenolic resins. They give specific tannin reaction with iron salt like ferric chloride.
Example
• Aloe-resinotannol
• Peru-resinotannol

• Tolu-resinotannol
Resin Esters
Different esters with benzoic acid, salicylic acid and cinnamic acid are found in resins
Glycoresins
Glycoresins upon hydrolysis produce sugar and resins. I they contain glucose they are called glucoresins.
Resens
Resenes are neutral resin, they are oxygenated compound. Resenes are resistant to different climatic condition and frequently used in the manufacture of varnishes. E.g.
• Darcoresenes
• Masticoresenes

Classification of Resins (on the basis of combination with other substances)

Resins
Rosin or Colophony
It is yellowish resins. It is aebiatic acid anhydride. It is left after the removal of volatile oil by distillation from oleo resin e.g. from pinus
It melts at 100’C. It is used in preparation of zinc oxide plaster and ointment. Also used in inks, varnishes, rubbers, soaps, wood polishes, cements and for water proofing cardboards and walls.
Cannabis
Cannabis consist of dried flowering tops of Cannabis sativa family cannabaceae
It is narcotic drug requiring licence for cultivation. There are three narcotic product obtained from cannabis:
Bhang (Hashish)
It is prepared by cutting leaves and flowering top. Resin is present in glandular trichrome
Ganja
Ganja consists of flowering and fruiting tops of female plant. For preparing ganja plants are collected when flowering stalks begin to turn yellow
Charas
Charas consist of resins, obtained from leaves by rubbing between hands.
Constituents
15-20% resins which includes tetrahydrocannabinol (THC), cannabinol, and cannabidiol It is narcotic, sedative, analgesic, euphoric and hallucinogenic (due to THC)
Oleo-Resins (Volatile Oil + Resins)
Oleo resins can be liquid, semisolid or solid, depending on the relative amount of volatile oil in the mixture.
Oleoresins are usually obtained by incision on bark and wood of different plants.

Turpentine is oleoresin obtained from Pinus Palustris
Turpentine is also called gum turpentine which is a misnomer (because it does not contain mucilage/gum) from scientific standpoint.
Turpentine occurs as yellowish opaque mas which stick when warmed and brittle when cold. It is soluble in alcohol, chloroform and ether.
Uses
Counter irritant

Ginger consist of dried rhizome of Zingiber officinale family Zingiberaceae
Ginger characteristic aroma is due to its volatile oil. Main constituent of which include 3 sesquiterpenes:
• Bisabolene
• Zingiberene
• Zingiber
Pungency of ginner is due to ginerol which can be lost by treating with 2% KOH
Uses
• Aromatic
• Carminative
• Dyspepsia
• Vomiting
• Cold
• Could
• Asthma
• Sialagogue (increase saliva production)
• Also increase peristalsis (intestinal movement)

The drug consists of dried fruit of Capsicum annum family solanaceae
Main constituent is capsaicin, which is used in analgesic preparation and is extremely pungent. It is used as rubefacient

Etoposide is semisynthetic derivative of Podophyllotoxin, used in treatment of lung cancer, testicular cancer and leukaemia. Also used for the treatment of venereal other warts.

Teniposide is also derivative of Podophyllotoxin having similar uses as etoposide.

Storax is the balsam obtained from stem of Liquidambar orientalis
Storax is a pathological product formed as a result of injury to the plant. Crude storax is purified by dissolving in methanol. It is a semisiold opaque mask.
Constituents
Alpha and beta storacin and its cinnamic ester
• Cinnamic acid
• Styracin
• And small quantities of vanillin and styrene
Uses
• In perfume
• Stimulant
• Expectorant
• As a preservative for fatty substances like lard
• Antiseptic
• Also used in compound benzoin tincture

Tolubalsam is obtained from Toluifera basamum family leguminosae
It is also a pathological product. It gradually harden and becomes brown or yellowish brown when exposed to air. It has characteristic sabanilla like odor. Most of the commercial tolubalsam comes from Aslavital
Constituents
• Resinoesters
• Toluresinotannol
• Cinemate
• Benzylbenzoate
• Benzoic acid
• Free cinnamic acid
• Vanillin etc.
Uses
• Perfumery
• Expectorant in cough preparation
• Antiseptic in the form of tincture
• Chewing gums